Rameshwaram is one of the holiest places in India and is nestled on a pretty island- Pamban island. According to Hindu mythology, this beautiful place is where Lord Rama created a bridge across the sea to Sri Lanka. It is one of the Char Dhams of India and is a religious place for Hindu devotees. It is one of the places that you should add to your travel bucket list.

What is Rameshwaram famous for?

The beautiful Rameshwaram is renowned for holding pilgrimage sites. It is one of the holy Char Dham. It holds the most famous temple Ramanathaswamy temple that is the most notable historic landmark of the town.

Places to visit in Rameshwaram

The Rameshwaram temple is the most popular in Rameshwaram and is devoted to Lord Shiva. It is one of the 12 jyotirlingas. It has the longest corridor in the world and immaculate carvings on pillars that make it truly a worth visiting place.

The Annai Indira Gandhi Road Bridge is the longest in southern India. It connects Rameshwaram island to the mainland. The other name of this bridge is the Pamban Bridge as it is located beside the bridge.

The Water Bird Sanctuary is a paradise for bird watchers. It attracts native and migratory bird species. This sanctuary is separated from the mainland by the Pamban channel and offers a shelter for the avian species.

Things to do in Rameshwaram

Vacation on mind? Then head towards Rameshwaram that holds several stunning places that truly need to be visited. Visit the Five-Faced Hanuman temple that is known for the five manifestations of Lord Hanuman and is one of the religious places to visit. Head towards another famous place that is Lakshmana Tirtham that is spiritually and architecturally attractive. Visit the Adam’s Bridge or Ram Setu that is a historic bridge that connects Rameshwaram island of India to the north-western coast of Sri Lanka. Visit the Kunthu Kal beach that is on the Pamban island in the Indian Ocean and is one of the famous places to visit in Rameshwaram. Pay a visit to the most renowned temples here like- Nambu Nayagiamman temple- a 14th-century temple, Jada Tirtham-renowned for the Artistry, the temple of Gandhamadhana, Jatayu Tirtham, Thiruppullani, Sugreevar temple, Badrakaliamman temple that will quench your thirst for spirituality and peace.

Here is a list of some major markets in Rameshwaram- Kurinji Textiles, House of Kalam, and temple shops.

Where to stay in Rameshwaram

Rameshwaram is the aptest destination to escape for a rejuvenating vacation.  One visiting can book hotels, resorts, and homestays on reaching the site of their visits. On other occasions, one can book online in advance which will make one escape from the anxiety of the travel tour.

How to reach Rameshwaram

The nearest airport is Madurai that is located around 174 km from Rameshwaram. It enjoys a good connection with prominent cities like- Chennai, Trichy, Bengaluru, and Mumbai.

Rameshwaram enjoys a good connection with major cities of the southern part of India by road. There are regular bus services regulated by state and local transport that are available to reach Rameshwaram via various routes.

The aptest time to visit Rameshwaram is from October to April as the weather is quite salubrious and very apt for sightseeing.

The months from March to June are the summer months with the temperature ranging between 27 to 40°C. The weather remains hot. It is the pilgrim season in Rameshwaram as the town is seen with various processions and chants throughout the area.

July till October is witnessed with monsoon season with the temperature ranging between 28 to 35°C. though monsoon is humid August to October provides a soothing climate to explore the places here as the temperature drops down during this time.

The months from December to February are considered to be the winter months and is the peak season for exploring Rameshwaram. The temperature drops during these months. It is indeed the best time as in December Rameshwaram hosts the festival of Arudhra Darshanam that is a major festival here. Going on a Honeymoon trip is itself a unique experience as these trips are meant for making the bond and under.... 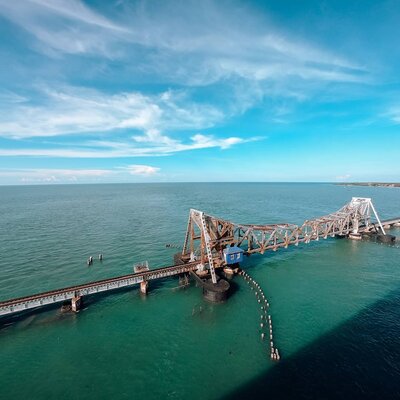 This spiritual yatra is to one of the Holy Chardham that is to Rameshwaram temple that is located in Tamil Nad.... This Kodaikanal & Ooty tour package will take to you to land that is called the Gift of the forest. In thi.... Investigate our Tirupati and Pondicherry Tour Package from Bangalore that offers a well managed itinerary. The....