Gwalior is a historic town in the Madhya Pradesh state. It was founded by King Surajesan. In November/December a four day Tansen Music festival is celebrated in Gwalior where the numerous classical musicians from all over the country perform near the Tomb of Tansen.

What is Gwalior famous for?

Gwalior is renowned for valour and love for art. It holds the majestic forts, pretty temples and many other marvellous monuments that remind of Hindus for their brave and proud heritage.

The pearl amongst fortresses in India- Gwalior Fort is one of the most astounding fortresses located in the entire northern and southern India. It is nestled on the top of a vast rocky mountain in Gwalior. The complex of this fort is well maintained and holds pretty temples, water tanks, and beautiful Palaces like- Man Mandir, the Gujari, the Jahangir, the Karan and the Shah Jahan.

Jai Vilas Palace or the Jai Vilas Mahal is the 19th-century palace in Gwalior. It was built in the year 1874 by Jayajirao Scindia, the then Maharaja of Gwalior. Jai Vilas Palace is still the residence of his descendants. This pretty palace holds the museum and houses the Chitrangada Raje Art Gallery and a library too.

Tansen was one of the greatest musicians of India and an eminent vocalist in the courts of Akbar in the medieval period. Tomb of Tansen is the burial site and is a piece of pretty architecture. Attend the Annual Tansen music festival her that is held here in November where prominent musicians from all over the country to perform numerous classical shows.

Thinking what to do in your Gwalior trip? Here is a list of some amazing things you can add in your Gwalior tour itinerary. Pay a visit to the pretty Sasbahu temple located in the Gwalior Fort. It is the 11th-century temple complex with the larger temple devoted to Lord Vishnu and the smaller one to Lord Shiva. This temple is perched on a cliff and offers panoramic views of the city.

Spend some time at the Gujari Mahal an archaeological museum constructed by king Man Singh Tomar for his wife Mrignayanee. Witness the collection of beautiful artefacts and sculptures.

Pay a visit to stunning Teli Ka Mandir that is known for its pretty architecture. This 30-metre high temple is the astounding and oldest monuments inside the fort. There are other places too that are worth visiting.

Being home to one of the oldest musical Gharanas in India, pretty rock-cut temples, palaces and marvellous museums Gwalior truly needs to be explored.

Stroll through the local markets of Gwalior and grab some pretty local handicrafts, traditional handlooms and exquisite stone-carved artefacts. Patankar and Sarafa bazaar are two such popular markets that offer pretty items to take back home.

Gwalior is the aptest destination to escape for a rejuvenating vacation. One visiting can book hotels, resorts, and homestays on reaching the site of their visits. On other occasions, one can book online in advance which will make one escape from the anxiety of the travel tour.

Gwalior airport is located just 8 km from the heart of the city. Gwalior airport enjoys a good connection with all the prominent cities of India like- Mumbai, Delhi, Goa, Hyderabad, Kolkata, and other cities too.

Gwalior enjoys a good connection with the prominent cities across India by regular trains.

Gwalior is on the North-South Corridor of the National Highway. NH3, NH75, and NH92 connect Gwalior to the prominent cities in India. One can avail bus service from Delhi, Jaipur, Kanpur, and Indore to reach Gwalior.

The best time to explore Gwalior is from October to March as the weather is quite salubrious and very apt for sightseeing. Attend the four-day Tansen Music Festival in November/December and enjoy the Indian classical music performances.

The months from March to June are the summer months with the temperature going up to 48°C. The weather remains very hot. Avoid this season for sightseeing.

July till September is witnessed with monsoon season with the temperature ranging between 25 to 32°C. It increases the humidity during the day time but the nights are cooler during the monsoon season.

The months from October to February are considered to be the winter months and is the peak season for exploring Gwalior. The temperature goes below subzero. The winters here are very chilling. 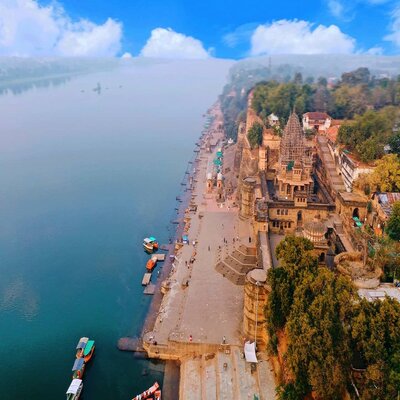