Ahmedabad is one of the most important cities in Gujarat. It is located on the banks of the Sabarmati river. The beautiful Ahmedabad is the former capital of Gujarat. Its delicacies, colorful culture is making it a fast-growing tourist destination.

What is Ahmedabad famous for?

Ahmedabad is renowned for its textiles and its tie-dye bandhani handloom technique. It is also known for holding the Sabarmati Ashram that is located directly beside the Sabarmati river and was constructed by Mahatama Gandhi after he returned from South Africa.

Places to visit in Ahmedabad

Get a chance to visit the Sabarmati Ashram that was once the residence of Mahatma Gandhi and his wife Kasturba. It is indeed a major attraction in the suburb of Ahmedabad in Gujarat. This ashram is located on the serene stretch of the Sabarmati River. The history reveals that the Dandi March was started from here by Gandhiji.

Dada Hari Wav was constructed by a woman of Sultan Begara’s harem in 1499 AD. It was made as a retreat during the hot summer. The whole structure of Dada Hari Wav is truly a masterpiece of Gujarati design and intricate artistry in stone.

Vaishno Devi temple is located along the Sarkhej Gandhinagar Highway. This temple is a stone-built place of worship. This temple is the small version of the original Vaishnodevi temple. The temple holds the idols of Lakshmi, Kali, Maa Durga, Saraswati. It also has the Shaiva shrine.

Things to do in Ahmedabad

Vacation on mind? Then get ready for a joyous ride to Ahmedabad. Pay a visit to the Swaminarayan temple located in the Kalupur area of Ahmedabad. Witness the green and yellow sculptures of numerous Hindu gods and goddesses with their bodies fitted in opulent dresses and ornaments that cover the structures of this 19th-century temple.

Head towards the Kankaria Lake is one of the biggest lakes in Ahmedabad. It is famed for its Kankaria Carnival that is full of the week-long fund and the festivities are held in the last week of December.

Pay a visit to the Hutheesing Jain temple that was established in 1848. It is a two-storied white marble structure and is home to 11 deity sculptures. There are other places too here in Ahmedabad that truly need to be added to the Ahmedabad tour itinerary.

Where to stay in Ahmedabad

Ahmedabad is the aptest destination to escape for a rejuvenating vacation. One visiting can book hotels, resorts, and homestays on reaching the site of their visits. On other occasions, one can book online in advance which will make one escape from the anxiety of the travel tour.

How to reach Ahmedabad

Ahmedabad has its railway station- Kalupur Station. It is well connected to major cities of India.

NH 8 connects Ahmedabad with other cities like Bhavnagar, Surat, Mumbai, Pune and Shirdi. There are several buses available for Mumbai, Shirdi, Pune, Bhavnagar, and Gandhinagar from Ahmedabad.

The best time to explore Ahmedabad is from October to March as the weather is quite salubrious and very apt for sightseeing.

The months from March to August are the summer months with the temperature going up to 50°C. The weather remains very hot. Avoid this season for sightseeing.

July till October is witnessed with monsoon season with the temperature ranging between 25 to 32°C. This season brings in heavy torrential rains and floods the river Sabarmati. Attend the Navratri festival here that is annually held towards the end of October.

The months from December to February are considered to be the winter months and is the peak season for exploring Ahmedabad. The temperature ranges from 5 to 20°C. Attend the famous International Kite festival that is celebrated this season. 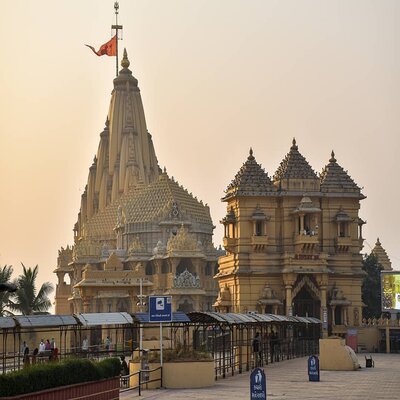