The City of Hills - Dungarpur

The Dungarpur is known as the city of hills as Dungar means hills. Dungarpur is an important city in the Vagad region which is in Rajasthan. The city is famous for its number of temples, lakes. The well-known temple the city holds is the Shrinathji temple which is devoted to Shrinathji. It is on the banks of Gaib Sagar Lake. Apart from lakes and Palaces, it has Dungarpur Museum which is known as Rajmata Devendra Kunwar.The City witnesses a prominent fair which is known as the Baneshwar fair held in the month of February at Baneshwar temple. The city is beautifully located at the foothills of the Aravalli range and the green marble that is mined here is world-famous as it is shipped all over the world to cater to its demand worldwide. It is one of the cleanest cities in Rajasthan. The architecture of its Palaces and Royal Residences is a matter of great recognition and value among the tourists. Dungarpur is irrigated by two rivers- Mahi and Som. Hence has fertile soil towards the Southwest part of the city.

What is Dungarpur famous for?

Apart from the Palace, lakes and temples, Dungarpur has an important place on the world map for its green marble mines. Famous tourist spots in Dungarpur are Badal Mahal, Juna Mahal, Udai Bilas Palace, Rajrajeshwer temple, Baneshwar temple and there are also other elegant spots of tourist interests. The tribal festival at Baneshwar temple is held on the full moon day of February every year. The festival is quite famous and celebrated with gaiety. Tribals from Rajasthan, Madhya Pradesh and Gujarat travel all the way to immerse the mortal remains of the dead and also to take a dip at the confluence of the rivers- Mahi Som and Jadkham.

Where to Stay in Dungarpur

Where to eat in Dungarpur

There are a number of restaurants where you can eat- 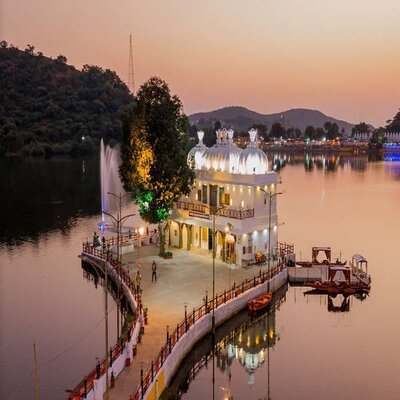 Dungarpur is famous for its number of temples, lakes. The well-known temple the city holds is the Shrinathji t....