Prayagraj is also referred to as Prayag or Teertharaj in the ancient scriptures and is also one of the biggest pilgrimage centers and the oldest city in India. This city is located at the confluence point of three holy rivers that are Ganga, Yamuna, and Saraswati. This confluence point is considered as the sacred place for Hindu and is named as Triveni. The largest gathering of devotees and pilgrims can be seen during The Kumbh Mela which is held every 12 years and Ardh Kumbh Mela that is held every six-year at this confluence point.

This place is also having it mentioned in the important event of India's struggle for freedom. Some of those events are the formation of the first Indian National Congress in the year 1885 and the other that was held in 1920 was the nonviolence movement led by Mahatma Gandhi. Prayagraj has its geography location at 25.45°N 81.84°E in the southern part of Uttar Pradesh. In the North and North East there are Awadh reasons to the south there is Baghelkhand region, in the South West there is Bundelkhand Region, in the East and site there is middle Ganga valley of North India and on the Western side there is Kaushambi which is the part of lower Doab region. This city is spread in an area of 5482 square kilometers having 20 development blocks, 2802 populated villages, and 8 tehsils.

Where to stay in Prayagraj

Where to eat in Prayagraj 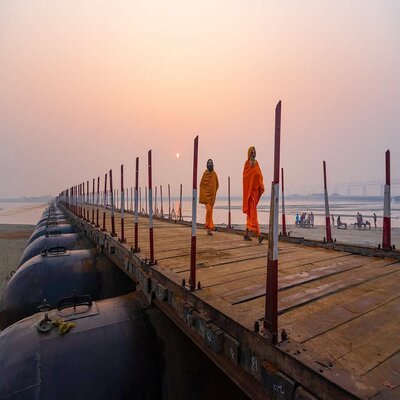 Prayagraj is a famous pilgrimage center. It has the holy Sangam where The Kumbh Mela takes place every 12....

This Prayagraj Package of 1 night and 2 days will take you to the old times of India's struggle for freedo....