The stunning Kumbhalgarh is a fabulous historic fortress town near Udaipur of Rajasthan and is renowned for its marvellous monuments, fantabulous places, an array of temples, and flamboyant chattris. The beautiful Kumbhalgarh is beautifully surrounded by opulent Aravalli hills.

The beautiful Kumbhalgarh celebrates a 3-day festival that is organised by the Department of Tourism of Rajasthan every year in December at Kumbhalgarh fort. This festival commemorates the contribution of Maharana Kumbh towards art and culture. During this festival, the Kumbhalgarh fort is illuminated and adorned. One can even enjoy the sound and light shows that are conducted at this festival.

Kumbhalgarh does not have a speciality in local cuisines but offers one a lot to choose from. One may find a wide range from Continental, South Indian, Rajasthani to North Indian and Punjabi.

It is believed that the fort was originally built by King Samprati of Maura age in the 6th century. It is further believed that its earliest name was Machhindrapur. The historical events after this till 1303 AD is missing because the pieces of evidence are unavailable. Rana Kumbha the Rana of Mewar of Sisodia Rajput clan went on to built Kumbhalgarh in its present form. He had taken the services of the then architect ‘Madan’ in building the fort. Kumbhalgarh was the largest fort among the 84 forts under the kingdom of Rana Kumbha.

Kumbhalgarh separated Mewar and Marwar from each other. The fort was inaccessible and impregnable to the assaults of the enemies. The assaults from 1457 to 1467 by Ahmed Shah1 and Mahmud Khalji were unsuccessful but Akbar took control of the fort in 1576. Maharana Pratap in 1585 recaptured the fort. In 1818 British took over the fort and returned it to Udaipur state. Many changes to the fort were made by Maharanas of Mewar without changing the original structure of the fort.

The various structures such as residential buildings and temples are thoroughly preserved.

What is Kumbhalgarh famous for

The stunning Kumbhalgarh is famed for its majestic monuments, royal chhatris and glorious palaces. Visit this place for witnessing the historical monuments that truly needs to be witnessed.

Places to be visited

Kumbhalgarh Fort is the most popular place among tourists. It is located at Kumbhalgarh. It was constructed by Rana Kumbha for over 4 centuries. Light shows are conducted here in the evening. It has also inspired major folk Literature in the country. The Kumbhalgarh fort wall is India’s very own Great wall & is the second longest wall in the world. The fort area has several major structures like Kumbha Palace, Badal Mahal, Jain temple & astounding 360 + Brahmanical.

Planning a trip to Kumbhalgarh? Then get ready to explore the historic town. Head towards Kumbhalgarh Wildlife Sanctuary that encompasses the historic Kumbhalgarh Fort and is named after the fort. It is home to 40 strong wolf pack that is rarely found elsewhere. Enjoy jeep safari, horseback safari and trekking here. One can even find many Garasia and Bhils tribals can be found here living in their traditional huts. The main attraction here is the natural beauty of the sanctuary attracts travellers.

Visit the Badal Mahal that is the part of the main fort. It is divided into two sections that are- Zanana, and Mardana halls for ladies and men respectively. It attracts travellers with its marvellous architecture. Just get a glimpse of the surrounding areas from the top of the tower that is truly mesmerizing. Pay a visit to Neelkanth Mahadeo temple that is withing the fort vicinity. This beautiful temple is devoted to Lord Shiva whose 6 feet Lingam is in the temple.

Head towards Mammadev temple is right below the Kumbhalgarh fort. It has four huge slabs with a beautiful inscription on them. Pay a visit to Vedi temple that is situated within the premises of Kumbhalgarh Fort in Hanuman Pol in Kumbhalgarh. The temple is built in the octagonal shape. It is standing on 36 pillars and was constructed by Rana Kumbha in the honour of the sacrifice of the pilgrims.

Visit Parshuram temple is a cave temple that is enshrined by lord shiva. It is believed that the Hindu sage Parshuram stayed and meditated here at this spot. There is another idol of Lord Ganesh and also has nine kinds that rarely run dry. There are around 500 stairs that lead down to the temple that is more like a trek. This beautiful temple offers some stunning views of the surrounding Aravalli Hills and thus is a loved place for nature lovers and tourists.

Kumbhalgarh being a small town does not have much scope for shopping. One can visit the nearest destinations for shopping at Udaipur, that is famed for its miniature paintings in Mughal and Rajput style. Shopaholics can go for jewellery, puppets, pottery, and stone-carved items that are truly superb souvenirs to take back home.

The climate of Kumbhalgarh is of a tropical type. The months starting from April brings summers in the region of Kumbhalgarh and ends in June. The temperature at this particular season ranges between 21 to 34°C making the weather hot. This season is not very apt for sightseeing. The monsoon here in Kumbhalgarh starts in July and ends in September with the temperature ranging between 20 to 29°C. Nature and rain lovers can head towards Kumbhalgarh during this time as the places here looks much-much magnificent with soothing and refreshing weather. This is also apt as one can spot several animals during this season. Monsoon season does wonder over the dense vegetation and makes the places gleam with greenery.

On the other hand, winters here starts in the months from October and ends in March with the temperature ranging between 15 to 28°C making the weather salubrious. It is indeed the perfect time to explore Kumbhalgarh.

The pretty Kumbhalgarh is the aptest destination to escape for a rejuvenating vacation from luxury to budget hotels, resorts, homestays, Kumbhalgarh has it all that is perfectly wrapped with modern-day luxury and home-like comfort. There are several well-furnished resorts, hotels, homestays, where you can make your stay comfortable. The exciting Kumbhalgarh tour will be a comfortable experience for the travellers as there are several cheap and luxury hotels, resorts, and homestays available for them amidst nature.

One visiting can book hotels, resorts, and homestays on reaching the site of their visits. On other occasions, one can book online in advance which will make one escape from the anxiety of the travel tour.

The nearest airport is the Udaipur airport that is at a distance of about 85kms away from Kumbhalgarh. The airport enjoys a good connection with major cities like- Delhi, Jaipur, and Jodhpur.

Kumbhalgarh does not have its bus station but buses from other cities do have stoppage here. Travellers can avail bus from Udaipur, Falna, Ajmer, Jodhpur, and Pushkar to reach Kumbhalgarh.

Travellers can explore Kumbhalgarh in the winter months that starts from October and ends in February. The weather at this time is comfortable and is very soothing. This is also an ideal time as there is a chance that one can spot wild animals in the wildlife sanctuary. One can even visit Kumbhalgarh in the monsoon that is from July to September as the luscious green vegetation of Kumbhalgarh is a natural wonder in the desert state Rajasthan.

The months starting from April brings summers in the region of Kumbhalgarh and ends in June. The temperature at this particular season ranges between 21 to 34°C making the weather hot. This season is not very apt for sightseeing.

Monsoon here in Kumbhalgarh starts in July and ends in September with the temperature ranging between 20 to 29°C. Nature and rain lovers can head towards Kumbhalgarh during this time as the places here looks much-much magnificent with soothing and refreshing weather. This is also apt as one can spot several animals during this season.

Winters here starts in the months from October and ends in March with the temperature ranging between 15 to 28°C making the weather salubrious. It is indeed the perfect time to explore Kumbhalgarh. What better way to spend your holiday than in the pretty land of Rajasthan? Nature, the locals, the culture, t.... We Travel Ride make sure to offer the best tour packages to our customers. This Rajasthan Holiday Tour of 13ni.... 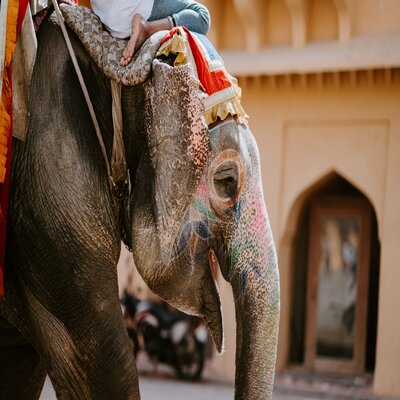 Bitten by a travel bug? Come to us we have systematized tour packages with a well- organized itinerary. Our 7 .... 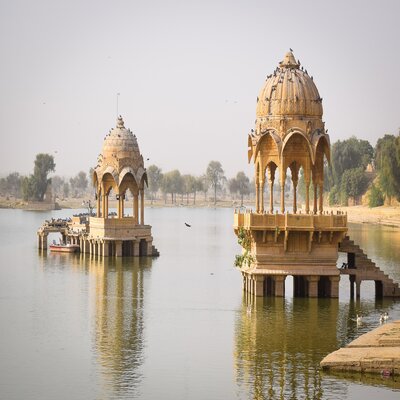 Bitten by tour bug? Then come to us, we offer tailor-made vacation packages.Our Rajasthan itinerary for 8 nigh....